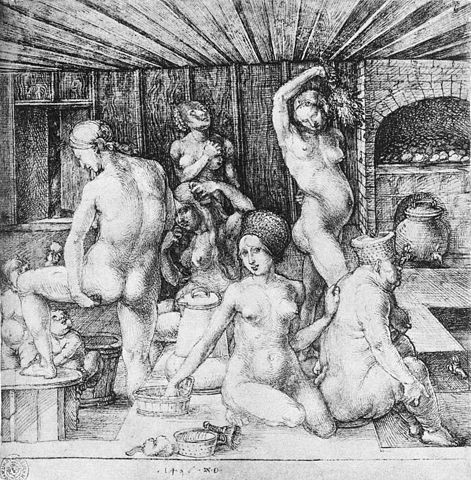 For some strange reason the myth continues that people in the Renaissance were dirty, slovenly people killed off by plagues because they never bathed. Nothing could be further from the truth in the Germanic part of the Holy Roman Empire, especially in the Imperial City of Nuremberg, were personal cleanliness was highly prized.

As a huge surprise to most was that in Nuremberg “bathing money” was a regular part of a person’s salary, paid weekly, usually on Saturday. Workers got to leave work early to go to the baths, where the prices were kept low by the government so everyone could attend and be clean.

Professional bath attendants, whose apprenticeship was three years long, followed by seven years of journeyman ship, were trained in the techniques of sanitary and medicinal bathing, as well as hair cutting, depilation (the fashion for men in Nuremberg was no beards), and simple bloodletting.  Health inspections were performed on a continual basis. The water was drawn from the local rivers running through the City (although most of that water was filthy!) through wooden pipes, then heated over wooden fires.

Nuremberg had 14 licensed baths. If one paid for the full treatment, it was an elaborate ritual.  First a trumpet sounded or a bell was rung to signal the water was hot.  Once inside and stripped of clothing, the feet were washed, then the body was scoured and slapped with a sheaf of twigs, next came steam bathing and rubbing to induce perspiration, swatting the skin with wet rags, scratching (for the pleasure of it; employees were required to provide this service), hair washing and cutting, combing, lavendering, bloodletting, and finally a nap.