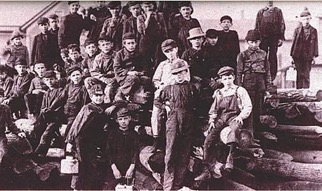 Many new jobs for women were created during the Industrial Age. From 1880 to 1900 the number of employed women went from 2.6 to 8.6 million. In 1880 4% of clerical workers were women; by 1920 the figure was 50%, but women could not get management positions. Although middle class married women were able to stay at home, among the poor, women—and children—had to work. (Truant officers who patrolled factories to get children into school were thwarted by struggling parents who needed the extra income.) A state of quasi-slavery existed where parents bound children to work, but child labor would not be squarely addressed until the Progressive Era.

Unions were generally hostile to women; men believed women shouldn’t work for wages because they undercut wage levels. Some separate women’s unions did exist, and they sought special legislation for female workers, etc. The International Ladies’ Garment Workers’ Union led a massive strike against New York City sweatshops. Union leaders came from the middle class and were not militant, but insistent. In the 19th century no special concern existed over children or women doing hard work—they had always worked within the family on farms or in family businesses. By 1890 18% of the labor force consisted of children between the ages of ten and fifteen.

Industrial safety was a large issue: factory work was very dangerous, and it was difficult if not impossible to hold factory owners responsible for deaths and injuries. Around 1900 25-35,000 deaths and 1 million injuries per year occurred on industrial jobs. Many of the deaths occurred on railroad jobs, which were especially dangerous. Fires, machinery accidents, train wrecks and other misfortunes were common. No federal regulation of safety and no enforcement of state or local safety regulations existed. Insurance and pensions were rare, and courts were not sympathetic to worker claims; no liability was seen if the worker was negligent, or if the employer was not. The burden of proof was on the injured party to prove he or she had not been negligent—and it is difficult to prove a negative. Poor English was a problem; many workers could not read safety regulations or instructions on operating machines. Only about two percent of those injured or killed ever recovered on claims.