1866 – The Metropolitan Health Act was passed in New York 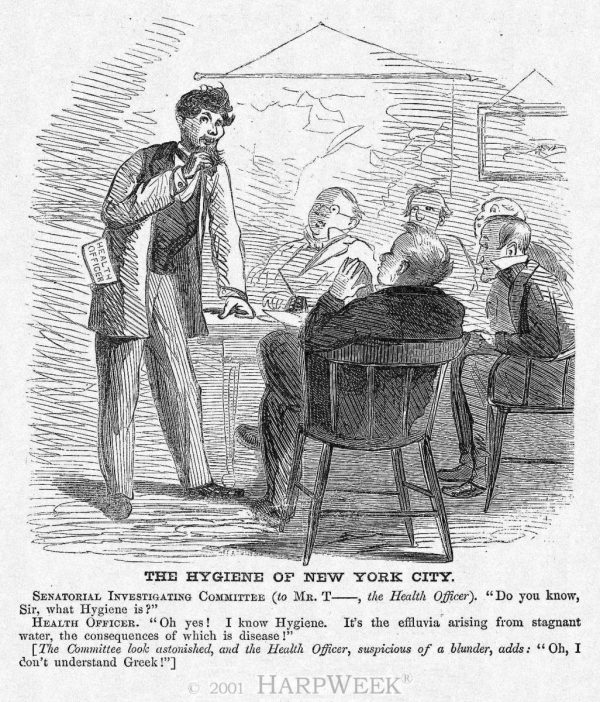 The Board of Health, later known as the Metropolitan Board of Health began after the American Civil War on February 18, 1865 when the first Report of the Council of Hygiene and Public Health of the Citizens’ Association of New York (known as Citizen’s Association Report on the Sanitary Condition of the City) was written:

Poor sanitation and filthy streets threatened both the physical health of the public as well as the economic welfare of the developing metropolis in the mid nineteenth century.

In the fall of 1865, Republicans gained seats in both houses, with the radical faction making a strong showing.  In his annual message, Governor Reuben Fenton emphasized the health crisis and urged passage of the bill.  The final version of the measure included a commission consisting of the four police commissioners, the health officer of the Port of New York, as well as four commissioners appointed by the governor, three of whom were required to be physicians.  On February 19, 1866, the bill passed the New York senate, and the assembly  and was signed into law by Governor Fenton on February 26.

Governor Fenton’s appointments to the new Metropolitan Board of Health were generally praised, and they set about their task with vigor.  Within a few weeks, they secured an agreement with city butchers to clean up and eventually relocate their slaughterhouses.  Health standards were imposed on the milk industry, the water supply was improved, and city streets even began to be cleaned, with the removal of thousands of tons of horse manure.  When the cholera epidemic broke out later in the spring of 1866, the Board of Health fought it with a stringent health code, house to house inspections, disinfectants, and quarantines.  Although the Democratic New York World charges the board with “terrorism,” the death toll in New York City was kept under 500, compared with 1200 in Cincinnati and 3500 in St. Louis.  With its short-term success, the New York Board of Health served as a model adopted by other cities and states.

The passage of the Metropolitan Health Act by the New York state legislature in 1866 illustrates many of the characteristics of reform in late-nineteenth century America, which continue to serve as a model for reform efforts today:  gathering statistical information by voluntary associations and interest groups; publicizing the perceived public problem through the news media; proposing a solution centered on a government board of appointed experts; and securing legislative approval by claiming an impending crisis (in this case, of cholera).